You are here: Home / Services / Appendicitis

Appendicitis is an inflammation of the appendix. It’s a medical emergency that almost always requires surgery as soon as possible to remove the appendix. Luckily, you can live just fine without it.

As acute appendicitis can lead to a burst appendix within 24 to 72 hours, it is important to seek medical attention as soon as symptoms begin to appear. 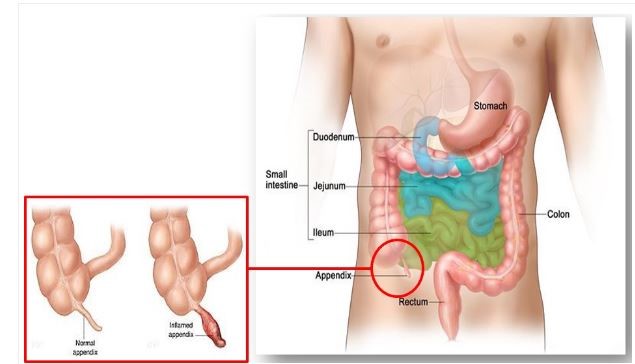 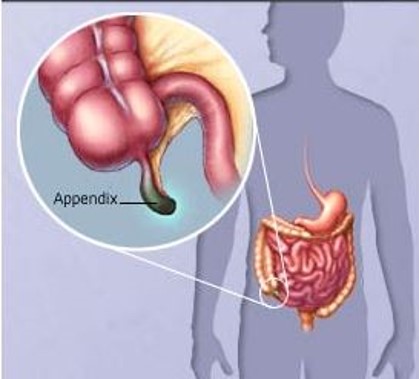 Where Is Your Appendix?

This 6-9 cm-long tube of tissue extends from your large intestine on the lower right side of your body.

As acute appendicitis can lead to a burst appendix within 24 to 72 hours, it is important to seek medical attention as soon as symptoms begin to appear. 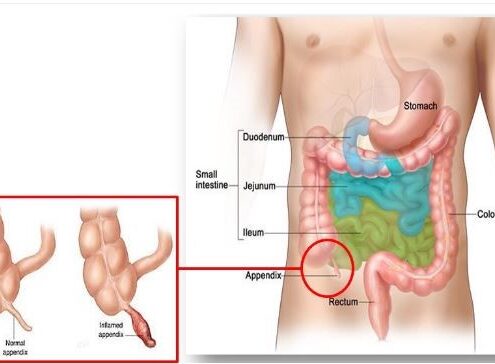 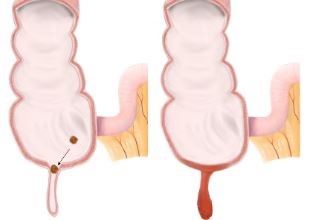 The blockage is most often caused by fecaliths, small accumulations of hardened stool, but other causes of a blocked appendage include:578
Infections caused by bacteria or, less commonly, viruses
Hemolytic anemia
Swollen lymph tissue in the area, more common among people with disorders that lead to inflammation in the bowel, such as diverticulitis, ulcerative colitis, or Crohn’s disease
Tumors of the appendix, although these are rare
Intestinal worms, although this is uncommon
Foreign bodies, such as fruit seed residue, although this is very rare

What Are the Symptoms of Appendicitis?

The classic symptoms of appendicitis include:
Pain in your lower right belly or pain near your navel that moves lower. This is usually the first sign.
Loss of appetite
Nausea and vomiting soon after belly pain begins
Swollen belly
Fever of 37.5-38.9 degrees celsius
Can’t pass gas

Other less common symptoms of appendicitis include:
Dull or sharp pain anywhere in your upper or lower belly, back, or rear end
Painful or difficult peeing
Vomiting before your belly pain starts
Severe cramps
Constipation or diarrhea with gas
If you have any of these symptoms, see a doctor right away. Timely diagnosis and treatment are important. Don’t eat, drink, or use any pain remedies, antacids, laxatives, or heating pads.

If left untreated, an inflamed appendix will burst, spilling bacteria and debris into the abdominal cavity, the central part of your body .This can lead to peritonitis, a serious inflammation of the abdominal cavity’s lining (the peritoneum). It can be deadly unless it is treated quickly with strong antibiotics.
Sometimes, an abscess forms outside an inflamed appendix.  Scar tissue then “walls off” the appendix from the rest of your organs. This keeps the infection from spreading. But an abscessed appendix can tear and lead to peritonitis.
Appendicitis Prevention
There’s no way to prevent appendicitis. But it may be less common in people who eat foods high in fiber, such as fresh fruits and vegetables.

How Is Appendicitis Diagnosed?

Diagnosing appendicitis can be tricky. Symptoms  are often unclear or similar to those of other illnesses, including gallbladder problems, bladder or urinary tract infection, Crohn’s disease, gastritis, kidney stones, intestinal infection, and ovary problems.
These tests can help diagnose appendicitis:
Examination of your abdomen to look for inflammation
Urine (pee) test to rule out a urinary tract infection
Rectal exam
Blood test to see whether your body is fighting an infection
CT scans
Ultrasound

Children are most likely to get appendicitis between the ages of 8 and 16.4 Young children with acute appendicitis may have difficulty describing the symptoms they are experiencing, so it is important that parents are aware of the signs of appendicitis.
The most common symptoms of acute appendicitis in children are:
Abdominal pain and pain with movement
Loss of appetite
Nausea and vomiting
Fever
Young children cannot always easily explain the specific location or feeling of pain. Even if a child is experiencing localized pain on the right side of their abdomen, they might identify the pain as affecting their entire stomach.5 This could lead parents to think their child has a different condition.
Children with appendicitis may also lie down and bend either the right hip or both hips upward as though drawing their knees to their chest. This position reduces the discomfort caused by an inflamed appendix. They may also be reluctant to breathe deeply, instead choosing to breathe shallowly into the chest to avoid moving the painful abdominal wall.5
In older children and teenagers, the most common symptoms are similar to those experienced by adults.
Good to know: It is not uncommon for acute appendicitis in children to be confused with gastroenteritis, a common condition also known as stomach flu. A misdiagnosis can increase the risk of a burst appendix.

Identifying appendicitis in pregnant people can be difficult, as many of the symptoms are similar to the discomfort normally associated with the early stages of pregnancy, such as:
Nausea
Vomiting
Cramping
If persistent nausea, vomiting and cramping occur, the affected person should seek urgent medical advice.
The uterus may also push the appendix into the upper abdomen by a few centimeters, particularly during the third trimester. In this case, pain from appendicitis may also occur in the upper right side of the abdomen, instead of just in the usual position in the lower right side.5
People in the later stages of pregnancy are difficult to diagnose with appendicitis because they tend to have unusual symptoms. These can include:6
A sudden change in bowel habits (constipation or diarrhea)
An increase in gas
New or worsening heartburn
Urinary symptoms such as frequent urination

What Is the Treatment for Appendicitis?

Appendicitis is almost always treated as an emergency.  Surgery to remove the appendix, which is called an appendectomy, is the standard treatment for almost all cases of appendicitis.
Generally, if your doctor suspects that you have appendicitis, they will quickly remove it to avoid a rupture. If you have an abscess, you may get two procedures: one to drain the abscess of pus and fluid, and a later one to take out the appendix. But some research shows that treating acute appendicitis with antibiotics may help you avoid surgery.

what to Expect During an Appendectomy

Before your appendix is taken out, you’ll take antibiotics to fight infection. You’ll usually get general anesthesia, meaning you’ll be asleep for the procedure. The doctor removes your appendix through a 6-10 cm long cut or with a device called a laparoscope (a thin telescope-like tool that lets them see inside your belly). This procedure is called laparoscopy. If you have peritonitis, the surgeon will also clean out your belly and drain the pus.
You can get up and move around within 12 hours after surgery. You should be able to go back to your normal routine in 2 to 3 weeks. If you had a laparoscopy, recovery is faster.

After an appendectomy, call doctor if you have:

Hernia surgeries of all kinds