In sleeve gastrectomy, the equivalent of 75 to 80% of the stomach is removed … and it is the most frequently performed operation in the world to lose weight ..
Sleeve gastrectomy has profound effects in life:
overall improvement in the quality of life
In which the equivalent of 60-70% of weight gain is lost during the first year of the operation
Cure or improve obesity-related health diseases such as type 2 diabetes, high blood pressure, and stop
Sleep apnea, fatty liver, joint pain and hyperlipidemia.
Decreased appetite to eat food.
Decreased sense of hunger

What are the effects of sleeve gastrectomy:
A stomach size reduction is performed, so people feel full sooner after the operation.
Make people feel less hungry (ghrelin) – hormonal changes such as those related to a lack of secretion of hunger hormones
– The increase in gastric motility makes food pass through the stomach and intestine faster.

History and Trend of the Gastric Sleeve

Over the past decade, the number of gastric sleeve surgeries continue to increase nearly every year. Now, more than half of all bariatric surgeries performed in US are gastric sleeve procedures.

How much weight will I lose after the Gastric Sleeve?

On average, people lose about 60-70% of their excess weight

The first 2 weeks: 10-20 pounds; most patients lose about one pound a day

Most people reach their lowest weight 12-24 months after surgery

Large clinical trials and studies have proven gastric sleeve surgery lead to resolution or improvement of many obesity related health problems such as:

Type 2 diabetes: Most studies indicated that 60-80% of patients with type 2 diabetes could achieve disease remission or improvement after gastric sleeve surgery

According to the SAGES (Society of American Gastrointestinal and Endoscopic Surgeons) guidelines for bariatric surgery, the indications for weight loss surgery are as follows:

BMI more than 40 without comorbidities

BMI 35 to 39.9 with at least one serious comorbidity including diabetes, hypertension, sleep apnea or limitations in the quality of life

BMI 30 to 34.9 with metabolic syndrome or diabetes that is uncontrolled with medical therapy

It is important to note that upon entrance to a bariatric surgery program and before proceeding with surgery, patients should participate in a guided weight loss program with exercise and lifestyle modifications; this will help ensure that the patient can make the commitment necessary to undergo the postoperative nutritional restrictions of the procedure.

In general, the pain is easily manageable after surgery. Most patients take less than the recommended pain medication

Most patients go back to work and/or school after 2-4 weeks. Fatigue is common the first 2 weeks due to low calorie intake from liquid diet. However, the majority of patients do not feel hungry during this stage of the diet. The energy level improves quickly after the introduction of the soft diet, which is approximately 2 weeks after surgery. On occasion, we allow patients to work from home 2-3 days per week after surgery.

Stricture/stenosis – In the past, we had one stricture among our first 20 gastric sleeve procedures. We have not had any strictures within the past 5 years.

Heart Burn – This is a very controversial topic in bariatric surgery and the data from different centers is inconsistent. In our experience, most patients with heartburn before surgery see improvement of symptoms after surgery due to weight loss. Some patients may develop new heartburn, which is treatable with over-the-counter anti-acid medications, in most cases.

Weight Regain – After 1-2 years, slight weight regain is common among all bariatric procedures and about 10-20% of patients can have significant weight regain after gastric sleeve surgery. After 5 years of follow up, many centers collected data to show that the majority of patients can maintain their weight loss after the Gastric Sleeve Surgery.

Excess skin due to rapid weight loss in a short period.

Nutrition after the sleeve gastrectomy

After the operation of the sleeve gastrectomy, the patient needs a special diet for a period of thirty-five days, and this diet is divided according to time into several patterns or stages, which are the clear liquids phase for a period of ten days, the phase of full fluids and pureed foods for another ten days, then the phase of soft meals for ten days, and finally Back to the natural food system, and at each stage there are specific types of foods that are allowed to be consumed.

The first day: to follow a liquid diet. Some surgeons allow patients to drink water a few hours after surgery

Clear fluid phase (10-14 days)
The patient can drink at this stage liquid soups such as broth, apple juice or filtered carrot juice without drinking citrus juice, and herbs such as flowers, anise or chamomile can be drunk, in addition to water, tea and coffee.
Full Fluid Phase (10 days)
This stage contains pure or thick soups mashed in a blender, such as vegetable soup, lentils, vermicelli, etc., and watermelon, melon or carrot juice can be drunk, and yogurt and low-fat milk are consumed, in addition to other liquids.
Pureed Food Stage (10 days)
The patient can, at this stage, eat any type of liquid present in the previous two stages, in addition to eating well-mashed fruits in an electric mixer, as well as drinking fruit cocktails, grilled or boiled vegetables that must be mashed, or eating starches such as rice soup or breakfast cereals with milk low fat. At this stage, it is forbidden to eat meat from fish or white and red meat, as well as eating bread and all kinds of soft drinks like Pepsi and coca cola , for a period of three to six months after the operation.

The normal diet phase after 30-34 days
It is possible to return to eating various foods and eating meat and solid foods, and at this stage the next tips must be followed to avoid any stomach imbalance: Eat slowly and chew well. Refrain from eating as soon as you feel full. Not to eat and drink at the same time. Distribute food to different times and eat six to eight snacks.

After surgery, all patients should take multi-vitamin and B complex

Exercise after the sleeve gastrectomy

Be careful not to neglect the sport after the operation; In addition to diet, exercise helps to lose weight in a healthy way, and the intensity of exercise must be gradually increased after the sleeve, where the patient begins to walk for a period of half an hour or more, then after a week he starts swimming, then after a month it is possible to ride a bicycle, and after three months he begins With stomach-tightening exercises and aerobics.

Comparison of Gastric Sleeve to other Types of Bariatric Procedures

Laparoscopic gastric banding (Lap-band) was once very popular. However, due to its high rate of long term complications and inferior weight loss, the number of Lap-band surgeries went down every year in the US and worldwide. Most of the US large academic Bariatric Surgery Centers rarely perform the Lap-band procedure at this time.

Technically, the Gastric Sleeve is a much simpler surgery. The operating time for gastric sleeve is usually 40-70 minutes, while gastric bypass surgery takes approximately 2-3 hours to complete.

Some long-term complications could occur with the Gastric Bypass patients including bowel obstruction, marginal ulcer, and internal hernias. The chance of Gastric Sleeve patients developing these complications is exceedingly rare.

An abdominal ultrasound is necessary for patients undergoing gastric bypass to identify possible liver pathology and cholelithiasis due to the high prevalence of the latter in this patient population.

patients with symptoms of acute or chronic cholecystitis or symptomatic cholecystitis should have their gallbladder removed during the bariatric procedure, as weight loss will only worsen their symptoms.

Esophagogastroduodenoscopy (EGD) is not routinely a recommended procedure in the workup for bariatric surgery. The American Society of Metabolic and Bariatric Surgery advises the use of endoscopy only for patients with significant gastrointestinal symptoms.

What are the routine tests before surgery?

Certain basic tests are done prior to surgery:

Other tests may be requested when indicated and include:

What is the purpose of pre-operative bariatric surgery tests?

An accurate assessment of your health is needed before surgery. The best way to avoid complications is to understand their potential in the first place. It is important to know if your thyroid function is adequate since hypothyroidism can lead to sudden death post-operatively.

If you are diabetic, special steps must be taken to control your blood sugar. Because surgery increases cardiac stress, your heart will be thoroughly evaluated.

These tests will determine if you have:

Why is a gastrointestinal evaluation necessary?

Patients with significant gastrointestinal symptoms such as:

They may be symptomatic of underlying problems including:

Why must I complete a sleep study?

The sleep study detects a tendency for sleep apnea. The abnormal stopping of breathing usually associated with airway blockage when the muscles relax during slumber. This condition is associated with a high mortality rate.

After surgery you will be sedated and will receive pain narcotics, which further depress normal breathing and reflexes. Airway blockage also becomes more dangerous at this time. It’s important that your surgeon has clear expectations of the procedure so he can decide how to handle possible irregularities.

What impact do medical problems have on bariatric surgery?

Medical problems such as serious heart or lung problems can increase the risk of any surgery. Conversely, if these problems are related to the patient’s weight, they also increase the need for surgery. Severe medical problems may not dissuade the surgeon from recommending bariatric surgery if it is otherwise appropriate, but those conditions will make a patient’s risk higher than average.

There are several contraindications for bariatric surgery procedures which include:

Points to be addressed for Gastric Sleeve and Pregnancy

Patients are advised to avoid pregnancy 12 months before the operation and up to 18 months after the operation.
In the event of pregnancy, it is recommended to closely monitor the patient’s weight and fetal health
Non-hormonal contraceptives are recommended as they are less likely to gain weight 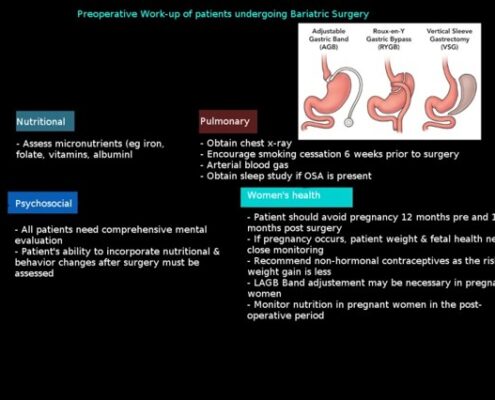 A gastric bypass is a surgical procedure to treat obesity that involves reducing the size of your stomach to facilitate early satiety and bypassing a section of your intestine to limit food absorption. As with the sleeve procedure, a reduction in size of the stomach restricts the amount of food intake and appetite.
Procedure Mini gastric bypass, One anastomosis gastric bypass
This procedure was traditionally carried out by a Roux-Y procedure where stomach and intestine are reconnected in two places. A single anastomosis gastric bypass is a modification that simplifies this procedure, reducing operating time and complications both early and late. 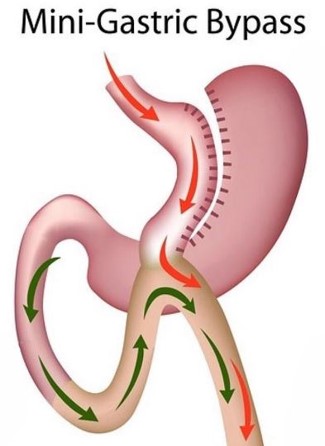 The gastric pouch is constructed similar to a sleeve gastrectomy but not as long. The small bowel is then measured 150-200 cm downstream and joined to the end of the gastric pouch.

Limits the amount of food ingested and also the calories absorbed

Ability to eat bread and meat is a little easier

RECOMMENDED FOR PATIENTS WITH: